The Oscars were televised Sunday night and I'm still reading and hearing people bitch and complain about everything from some young girl's hairstyle to the movie that took home the little statue for best picture - and everything in between. Everyone has an opinion... on the host and his performance, on the speeches where winners expressed their personal opinions on a certain subject, on the fashion, and my personal favorite... the song that won best song, it's performers, and their speeches.

We all have personal opinions. What gets me is how people feel like their personal opinions are the only right ones. They fail to see that we each form and nurture our own opinions, which in most cases won't align with theirs. They get upset, if not down right mad, when those opinions don't line up with their own. They then form negative feelings towards those who have different opinions and some even want to argue that their opinion is the only one with merit, and before you know it, we have a war of opinions.

Of course, I'm generalizing a little. Not everyone does this, and we all do it to different degrees. Yes, all of us. As much as this situation bothers me, I have to be honest with myself and admit that I can get upset and frustrated with people and their opinions. I have been known to call someone an idiot more than I'd like to admit. This is something I recognize and will continue to work on.

There are reasons I feel like we've ended up in this spot, the war of opinions, and maybe I'll write my opinions on that at another time. What I'd like is for people to stop and think before they express their own opinion(s) or slam someone else for sharing theirs. Expressing one's opinion isn't necessarily wrong, it's how it's expressed that could be the problem. If it's done like it's the only right way of looking at a situation, then it usually is a problem.

Back to the Oscars... personally, I thought the host wasn't the best, but he wasn't the worst. We can't, and shouldn't, expect perfection. As far as the dresses, and tuxes, and hairstyles, and even jewelry... there were some real winners, but that doesn't mean the others were losers. The movie that won best movie deserved to win, whether I wanted it to or not, because a group of qualified voters cast their individual vote, also known as their opinion, and the majority said that was the movie most deserving.

And the best song winner, well, maybe we just chalk it up to 'haters are going to hate.' The Glenn Campbell song was beautiful and pulled at our heartstrings, but again, a group of voters deemed that Glory was the better song. But it seems like because it was sung by two colored men, about the plight and on-going struggle of people of color, and from a movie that shines a light on the history and realities of racism, it riles people up and brings out rude and hurtful opinions. I thought their speeches were beautifully said; from their heart and expressing the feelings that so many people have in dealing with injustice and hate.

It's been so long since I've posted here that I'm not sure anyone will stop by anymore. But if you are, thank you, and I wanted to let you know that I just made public a new blog where I've been journaling through this journey I've been on ever since I was diagnosed with breast cancer.

I felt like here, Sunshine on my Shoulders, hasn't been the right place for me to share my updates, thoughts and feelings. I know there are a lot of people who don't want to read about cancer or someone's journey through it. I understand and respect that. I probably would have been one of those persons prior to this. Hopefully, I'll still post occasionally here, but you can always find me over at the new blog.

But the writing has been therapeutic so I've been doing it in private. I have realized that I needed a better way to keep my family and friends updated on how I've been feeling and what I've been experiencing. This blog seemed like the obvious answer. There's even photos.

I did have a TUMBLR blog that I made public here a few posts back where I wrote about the journey up to my lumpectomy, but then I stopped writing there. This new blog has incorporated those posts and then has continued on from when I received the news that the cancer was invasive and that I would have to undergo chemotherapy.

You can find WALKING IN SUNSHINE at this address: http://walkingnsunshine.blogspot.com/
(notice there is no 'i' in 'in')

For those who aren't inclined to visit me over there, let me give you a quick update. I made it through the last three weeks after my first round of chemotherapy. I had some minor side effects that were manageable, but nothing severe. The hardest part was that my hair has started to fall out. I go in for round 2 today.

I have a lot to be thankful for and have so many blessings that God has given me and my family. If you have said one or many prayers for me... thank you. Words can not tell you how much I appreciate them and your friendship. You are one of those blessings =)
Posted by ... at 12:09 AM 10 comments:

My weekend started Friday morning as I headed up into the mountains for a women's retreat. The weather was lousy and my windshield wipers never stopped during the three hour trip, wiping away snow, sleet, and heavy rain.

After stopping in Boulder to have lunch with my son, Jake, I continued on up into the mountains where it looked like a winter wonderland. I love the mountains in the summer, when you can enjoy the greenery and the smell of the wood and sunshine. But early Spring showed off it's beauty and I felt blessed to have spent time watching the snow fall and the seeing the landscape covered in white.

The weekend consisted of fellowship with 18 amazing women as well as time spent by myself, replenishing my energy reserves. We laughed until we cried, and we cried until we laughed. We praised God in song and prayer. We ate and we shopped. We loved and felt loved. It was a wonderful weekend, and I came down from the mountain, under blue skies and mild temperatures, feeling refreshed and renewed. 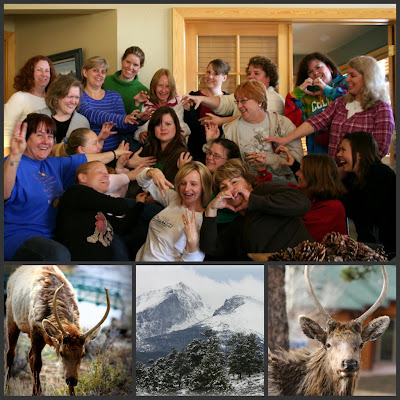 ...
This is where I share my heart, where I hash out what's going on in my head, where I reflect on memories, and look forward with hope and in faith.